Be a part of the Waldameer Team and earn up to $15/hr! Apply Now!

Waldameer’s origins began in the late 1800’s as Hoffman’s grove, an Erie area popular picnic spot overlooking the lake. This serene destination caught the attention of the Erie Electric Motor Co., the city’s main trolley company. They leased Hoffman’s grove and renamed the land Waldameer, German for “woods by the sea” – in 1896 Waldameer Park was born. 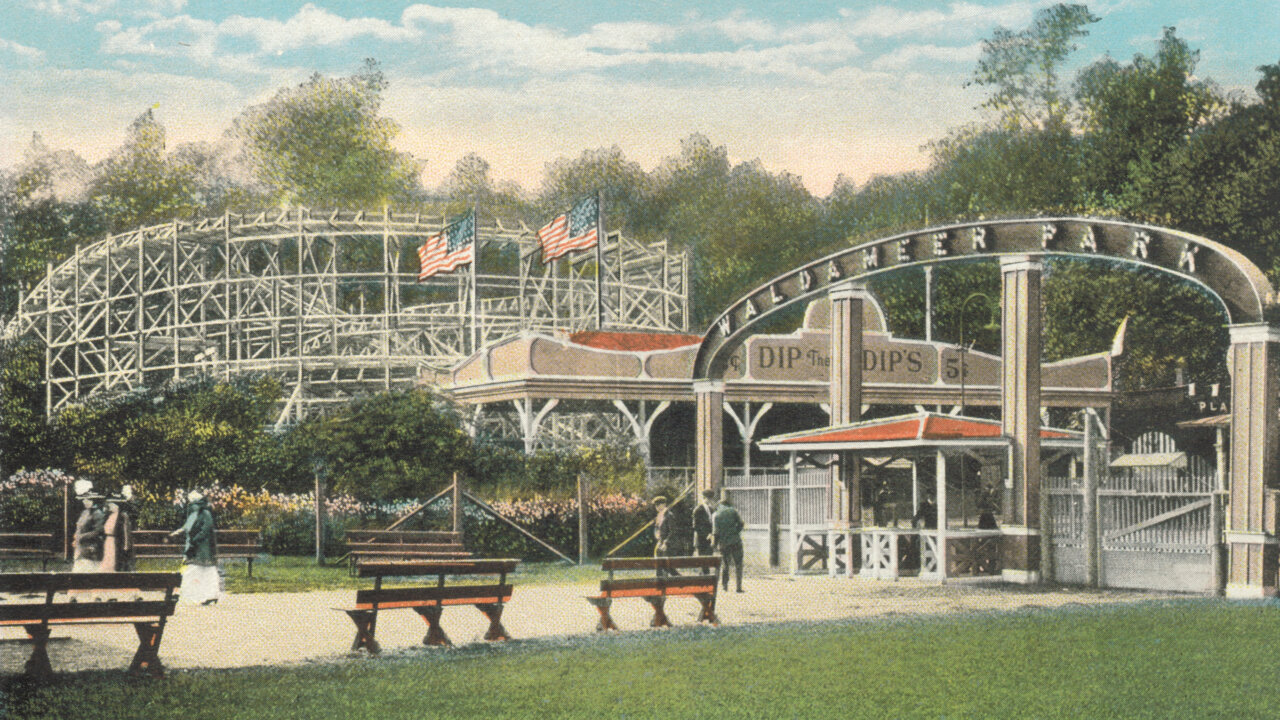 Hoffman’s Grove, a popular local picnic spot, was purchased by the Erie Electric Motor Company trolley line. The property was renamed, “Waldameer,” which is German for “Woods by the Sea.” The picnic are was highlighted by a large beach on the shore of Lake Erie and a modern bathhouse for the time. Some of the first “rides” were along the lake shore. The trolley company expanded the park with a $1,000 dance hall, carousel, and Hofbrau German Beer garden complete with singing waiters in the early 1900s. Prohibition in 1919 unfortunately closed the popular Hofbrau. Waldameer’s first roller coaster opened in 1907, named Dip the Dips. A second coaster, Scenic Railway was added in 1915 for the high price of $30,000.

The 1920’s were the golden age of the amusement park industry. Waldameer continued ride expansions with the opening of its largest roller coaster, Ravine Flyer, in 1922. Ravine Flyer featured drops up to 90 feet, and was further enhanced with the construction of Peninsula Drive under the largest drop. Unfortunately tragedy resulted in the removal of Ravine Flyer after the 1938 season. Ravine Flyer sat in the same location as the present-day Ravine Flyer II. The nearby Lakeview Picnic shelter was the original Ravine Flyer station!

Now under general management of Alex Moeller, a variety of other attractions opened in the 1920s such as a miniature train, caterpillar, whip, funhouse, and the fondly remembered Old Mill. The Depression of the 1930’s brought on the most challenging decade of the Park’s existence. Talking movies and the repeal of prohibition helped attendance, but tough times continued. 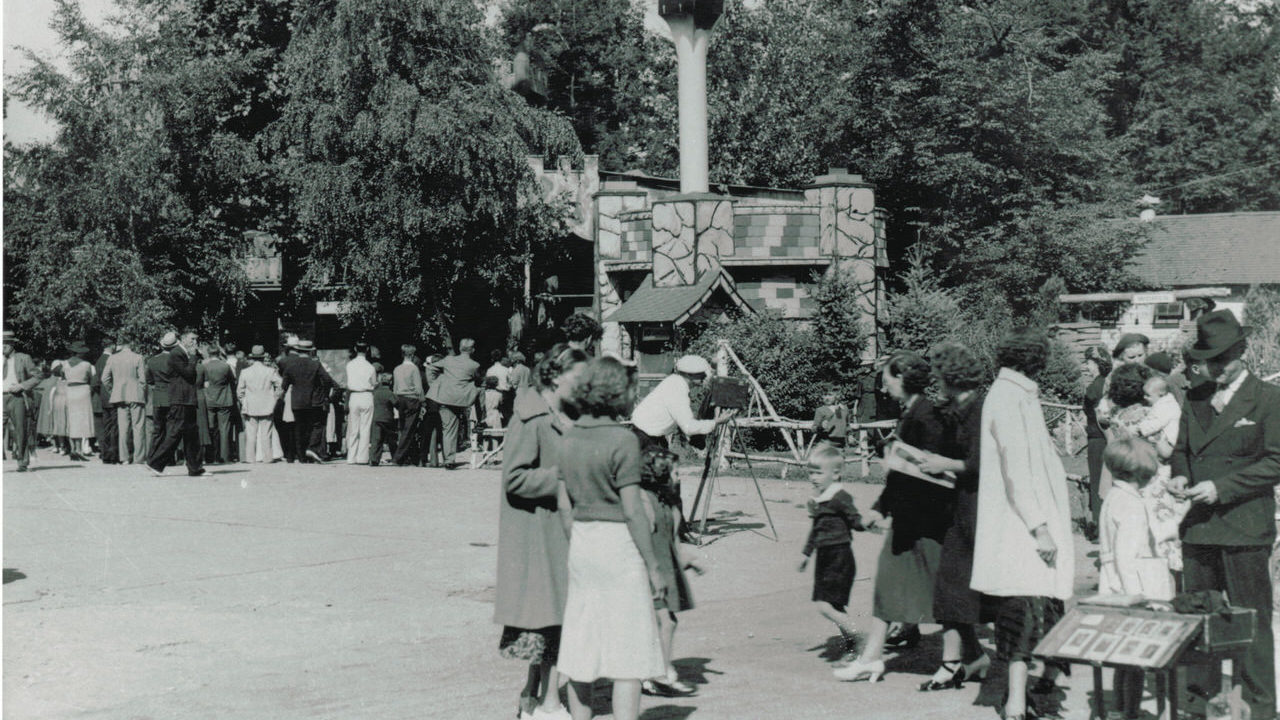 Emerging from the Depression

With an improving economy, more rides were added and new dance hall was built (replacing the one that burned down in ’37). A local contest was held for a name, and Rainbow Gardens was selected. Rainbow Gardens continues to host large events to this day.

World War II limited park expansion throughout the early and mid 1940s. In 1945, Alex Moeller became owner of the Park and an 11-year-old Paul Nelson (a family friend) began working. As the war ended, and families boomed. Kiddie attractions became popular in amusement parks. At the end of the 1940s and into the early 1950’s, several children’s rides including present-day Pony Carts, Wet Boats, and Sky Fighter were added. 1951 saw the addition of the Comet roller coaster; the first coaster to operate in the park since Ravine Flyer closed in 1938. In the mid 50’s, Monkey Island closed – reportedly the government bought all the monkeys for the new space program. 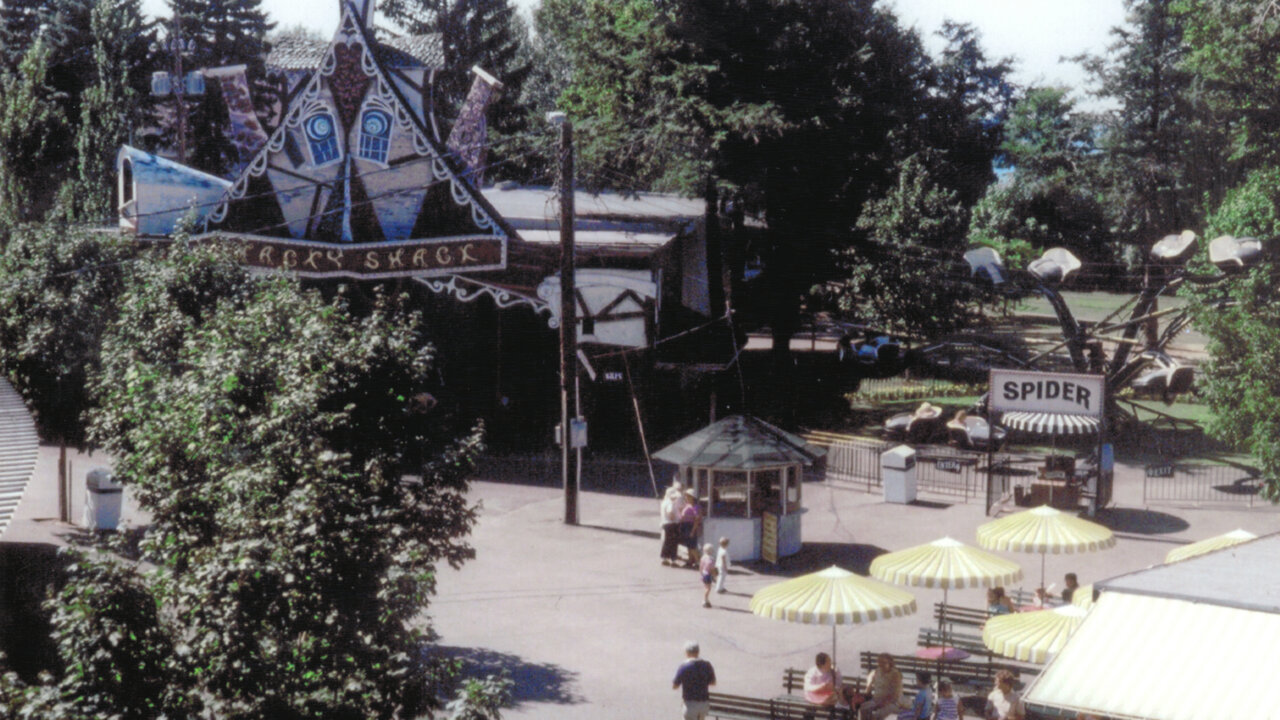 The early to mid 60’s introduced family favorites such as Scrambler and Tilt-A-Whirl. Thrill seekers welcomed the infamous Flying Coaster known by locals as “The Bump” in 1962. In 1965 Park Owner Alex Moeller died, and current owner. Paul Nelson (since adopted by the Moellers, working up to GM), took over. His first projects focused on upgraded the Park’s aging infrastructure.

The early 1970s saw the additions of two of Waldameer’s most popular attractions, the the Whacky Shack in 1970 and Pirate’s Cove in 1972.  Other current attractions built in the 1970s included the L. Ruth Express Train (named after Alex Moeller’s widow), Paratrooper, and Spider. In 1978 Paul Nelson assumed full ownership of the park and added the Sky Ride. 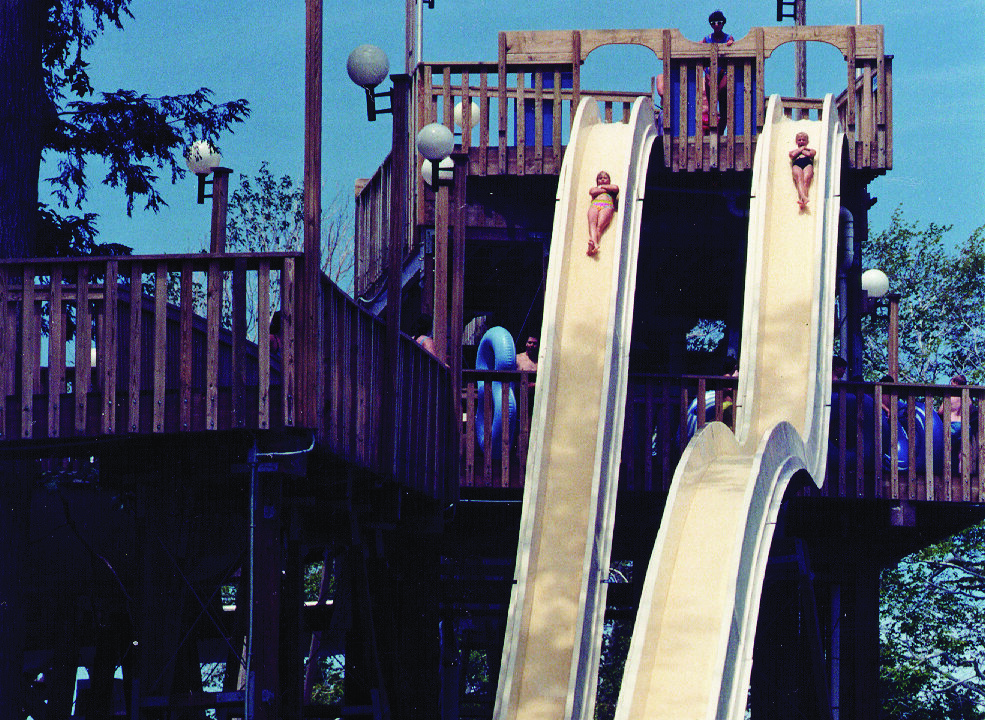 After a slow time for expansion in the early 1980s, Paul Nelson made a major business choice in 1985: deciding to go into debt and significantly expand. Water World debuted in 1986 with two giant water slides and a children’s play area. Following the 1988 season, the old carousel and Blue Goose children’s ride were auctioned off with $1 million proceeds used for further expansion of Water World and picnic areas. The risk paid off with record seasons closing out the decade. 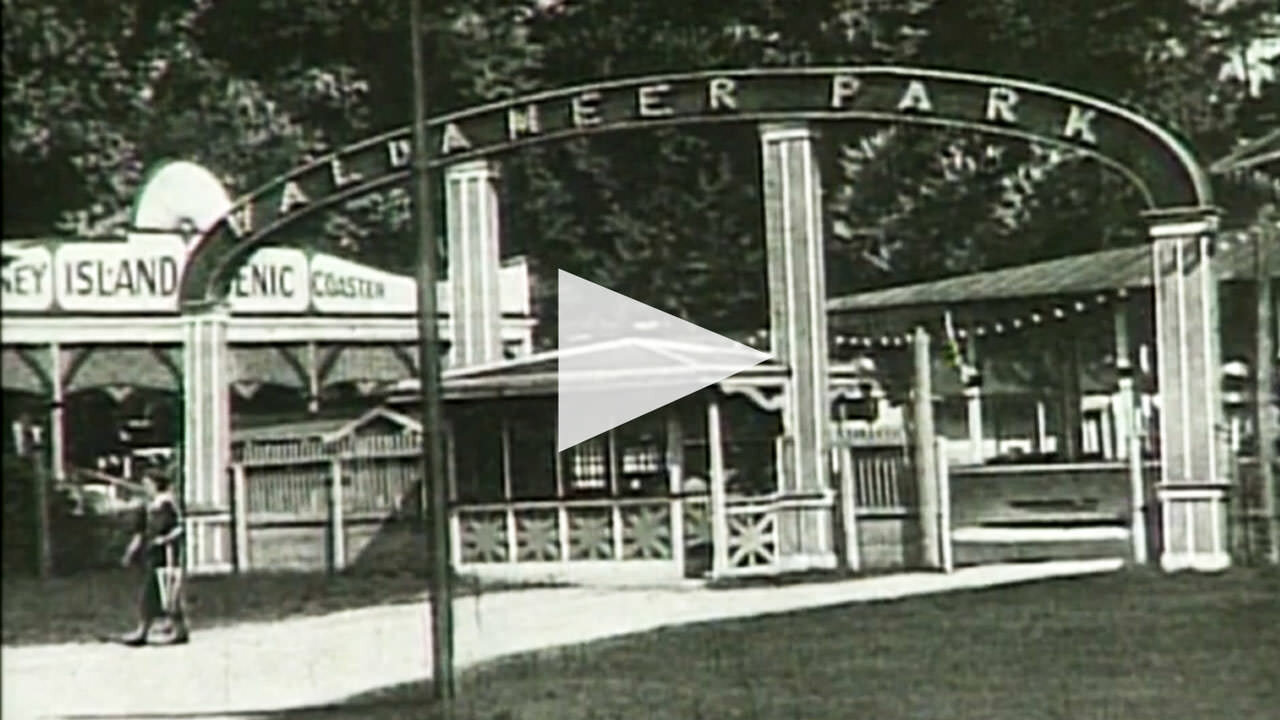 With Water World expansions dominating the late 1980s and into the early 1990s, ride expansion resumed for the remainder of the decade. New rides included Sea Dragon in 1992, the 100’ tall Giant Ferris Wheel in 1994, and Wipeout in 1995. While very popular, increasing mechanical costs led to the decision to remove the Flying Coaster after the 1994 season.

For Waldameer’s 100th Anniversary in 1996 (making Waldameer the 10th oldest amusement park in the Country), the most ambitious expansion ever debuted – the Thunder Rive log flume, replacing an aging Old Mill. Steve Gorman, Paul Nelson’s son-in law, came on as GM this same year, ensuring continuity of ownership. The decade closed with major renovations to midway games, concessions, and the addition of the Ali Baba thrill ride. 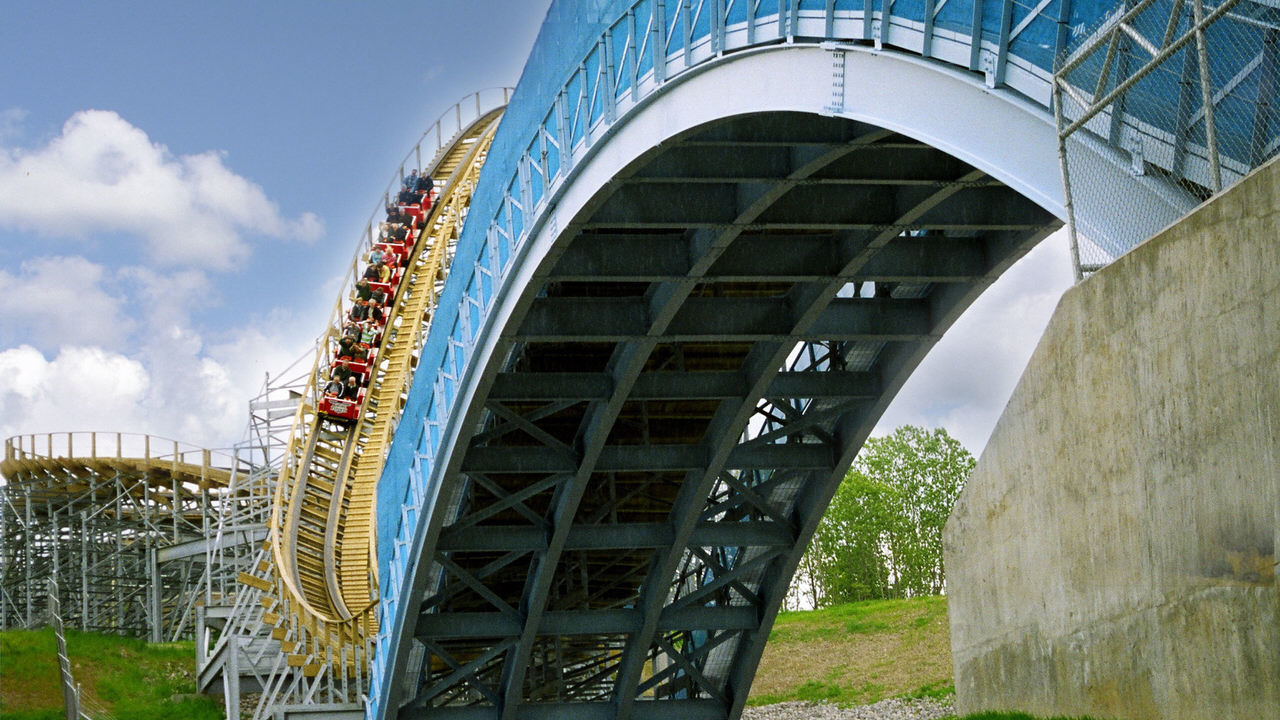 Waldameer entered the new millennium with a continued commitment to an ever-improving experience for guests. New rides included the Ravine Flyer 3 family coaster in 2000, Steel Dragon spinning coaster in 2004, and the XScream Drop Tower in 2007. Additions throughout the 1990s and early 2000s diversified Waldameer’s ride offerings, but the park was still missing one piece, a signature roller coaster.

In 2008, after years of planning and legal battles, Paul Nelson’s dream of seeing the Ravine Flyer soar again was realized with the opening of the Ravine Flyer II roller coaster. The Gravity Group designed Ravine Flyer II features a 120ft drop and crosses over Peninsula Drive as did it’s predecessor. Ravine Flyer II exceeded all expectations and won the prestigious Amusement Today Golden Ticket Award for the best new ride in the world in 2008. Following the success of Ravine Flyer II, the Mega Vortex thrill ride was added to the south end of the midway in 2009. 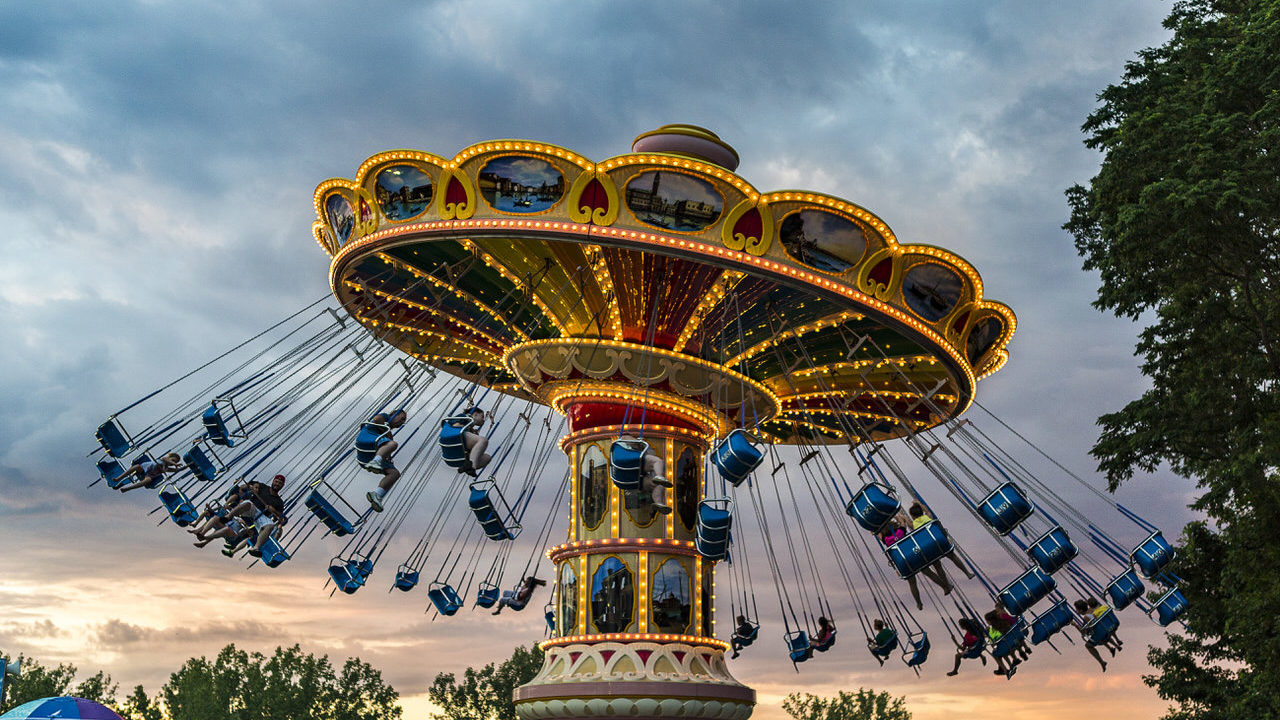 More Fun for the Whole Family

In 2011 the amusement park opened the “North End” expansion to the midway between the Sea Dragon and Ferris Wheel. The North End features three family rides, Flying Swings, SS Wally and Wendy’s Tea Party. Also in 2011, the L. Ruth Express miniature train was upgraded with a new Chance C.P. Huntington engine with a wheelchair accessible coach. Another new C.P. Huntington engine and coaches was added in 2012 to allow 2-train operation to accommodate the growing crowds. Thrill ride offerings were expanded again in 2013 with the addition of the Music Express along with a redesigned south end of midway. 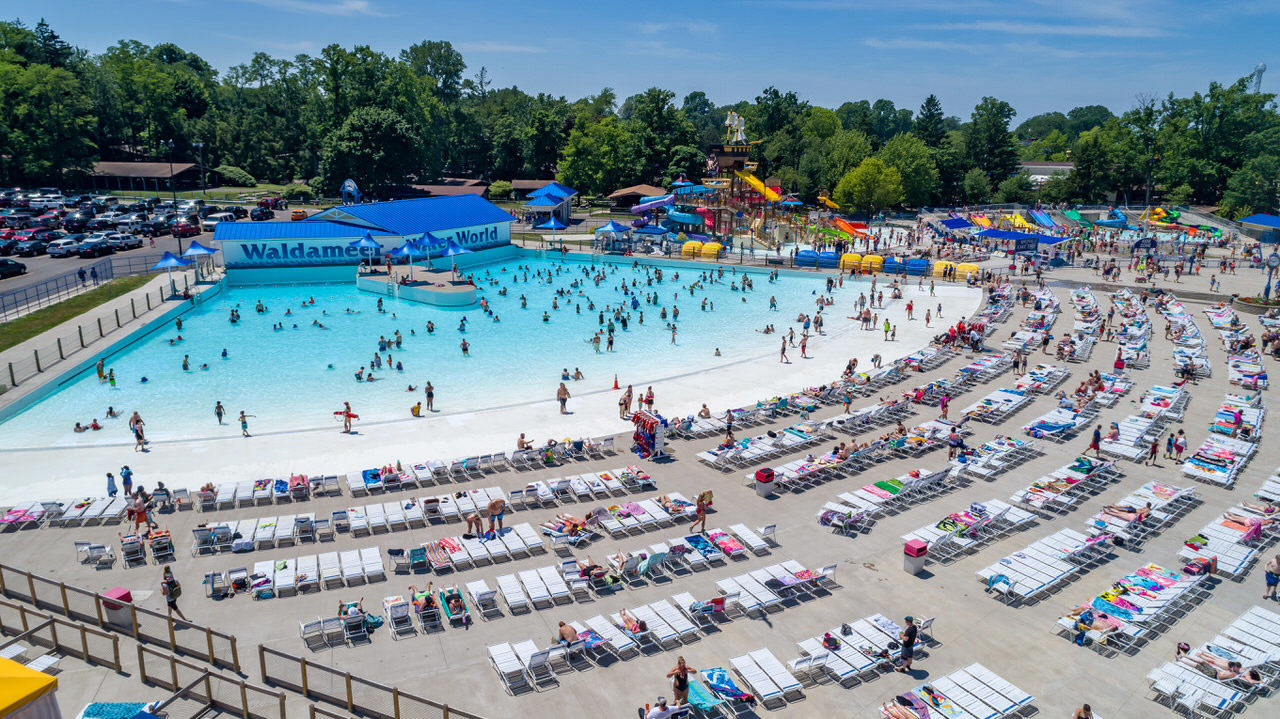 2015 welcomed our largest expansion in history with a Giant Wave pool featuring almost 500,000 gallons of water and accommodating over 1,000 people in Water World. The Wave Pool was only the beginning of an ambitious Water World expansion with additions of the Kidz Slide’n Spray Zone in 2016, and the the Battle of Lake Erie in 2017 to round out the family water attraction offerings. Water World expansions continued in 2018 and 2019 with the addition of the thrilling cannon-bowl waterslide and a second heated relaxing pool. Amenities within Water World were also expanded with the opening of Waveside Grill in 2015 and the introduction of private cabanas and umbrellas as an exclusive space for families with shade and food service.

The amusement park ended the 2010s decade with the additions of Balloon Race in 2018 and Chaos in 2019. Chaos was the first ride at Waldameer since the 1940s to take riders upside down. Expansions in Waldameer & Water World were met with several consecutive record seasons from 2015-2019. 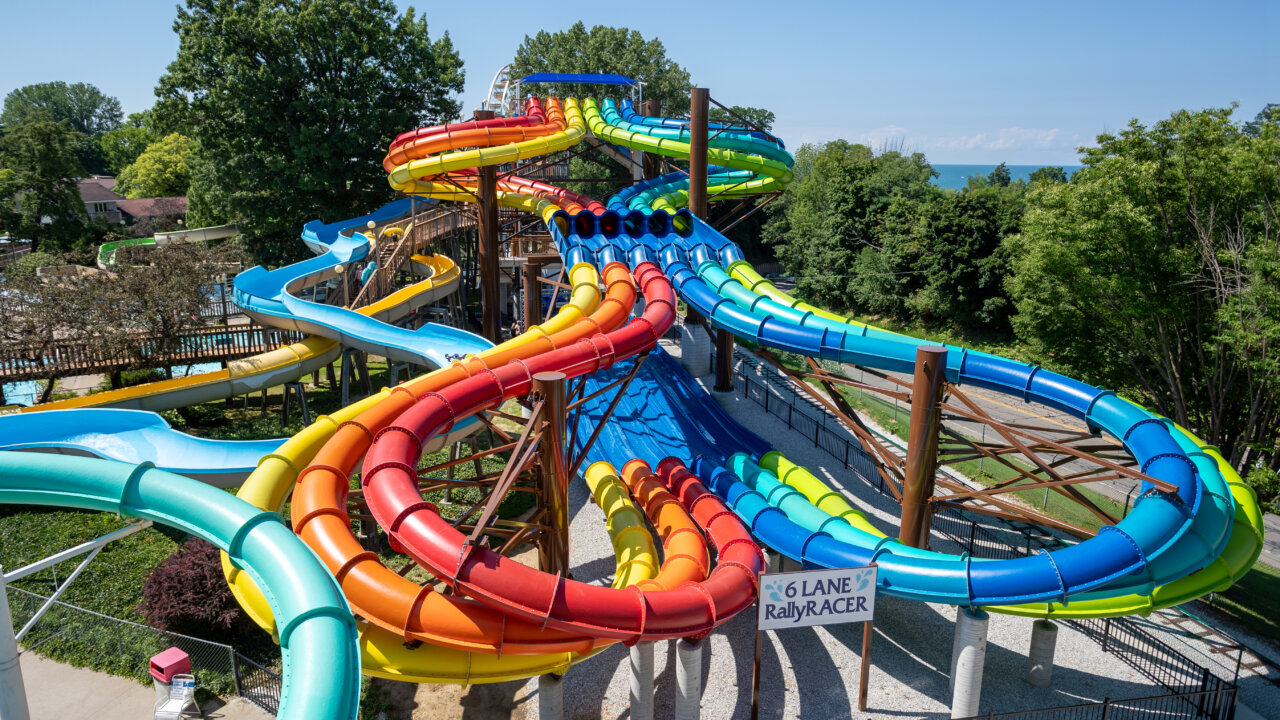 The Next Challenge to Overcome

Facing unprecedented challenges from the covid-19 pandemic, Waldameer & Water World started the 2020 Season with an early July opening. Two new attractions were introduced, Rally Racer in Water World and Whirlwind in Waldameer. Rally Racer is a thrilling 6-lane mat racer waterslide featuring two spirals and a unique open “rally section” before racing to the finish line. Whirlwind is a figure-eight family spinning coaster replacing the aging Showtime Theatre. Both attractions proved to be very popular with families despite a dramatic decrease in park attendance due to the ongoing pandemic.

Waldameer celebrated its 125th anniversary in 2021, and was met with a strong rebound in attendance despite a shorter operating season. Recent expansion may have slowed as a result of the of the covid-19 pandemic, but we at Waldameer & Water World are committed to enhancing our ride and water attraction offerings in the near future.